A downloadable game for Windows

Nova Swarm is a 1v4 local multiplayer VR space battle game. A maniacal AI ship (the VR player) with a powerful laser, rechargeable shield, and undying hatred of the human race faces off against an armada of humans (up to four players with standard XBox or similar controllers) piloting fragile but agile ships capable of using a variety of weapon and tactical item configurations. Not only that, but the ships are invisible when they’re not shooting. Grab four friends, or just face off against some CPU players. Either way, there will be tons of explosions.

Playing a single-player game in VR can often feel isolating. Even when others are watching, you’re stuck in a headset where you can’t see anyone around you. Also, those others may feel left out, especially after the novelty of VR has worn off. VR is such an amazing experience, and it should be fun not only for the person in VR, but for everyone else too. Local multiplayer in the usual symmetrical sense is currently difficult to achieve in VR, but there are a lot of possibilities for asymmetric gameplay. With games like Keep Talking and Nobody Explodes and Panoptic (which is currently a demo), it’s clear that there are ways to make VR feel inclusive and fun for both the player in VR and those outside of it.

Nova Swarm pits a deadly goliath of a ship (the VR player) against an armada of little ships (up to four players with standard XBox or similar controllers).

...isn't in this game. YET. Creating a local multiplayer experience was my primary goal, but I sympathize with both the fact that VR is expensive and gathering friends can be like herding space-cats. Getting VR players playing with non-VR players over the internet is now my primary focus on this game, and though I have to balance that with my real job, it's about 50% networked already, and should be ready for online play in a few months. Updates to come!

Want to support this game?

If you like what you see and want me to keep making stuff like this, you can donate a bit o' green when you download the game (thanks!)
Alternatively, you can become a supporter of my work via Patreon!

This game is in Alpha!

That means there's a good chance things will be broken, weird, or even just plain not fun (though I hope that's not the case!) I'll be continuing to improve on things over time, so it will also go through a lot of changes.

Want to give some feedback?

Awesome! I love feedback! Whether you love it or hate it, here's a form you can fill out to voice your opinion. All feedback is very valuable at this stage of the game, so I thoroughly appreciate anything you take the time to say.

The controls aren't listed anywhere in-game yet, so read up on them here if you want the full experience.

"Have you thought about..."

Of course! In fact, if you press ESC or the menu button on the Vive controller, it will open up a Settings panel where you can adjust the way the game plays to your liking, and even save and load your adjustments. That said, if you find that an adjustment you make significantly increases the "fun factor" for you, please let me know in the feedback form!

Does this game have a Discord server?

It does! Feel free to join and make your voice be heard:

Extract it? Though I usually recommend using the itch app, since it automatically updates the game and handles/organizes things a bit more nicely.

I have a nintendo switch pro controller but I think this only works with a xbox gamepad and I don't wanna pay for one. Pls can you make  the game work on any controller(or at least popular ones) or even keyboard and mouse so all can play this game

Huh, I'm surprised it doesn't work with the Switch Pro controller. If I get around to updating this again at some point, I'll look into why that might be (and mouse and keyboard support will be added).

I'm sure you've been asked this before but are there any plans to release a version for the Quest?

I don't have a Quest, but if you can play PC games on it (which, presumably you can now with Air Link or the Oculus link cable), it should work fine? If you're asking about a standalone version, since the game is based around having other players using controllers, probably not.

Hey there, love your game, any chance you could release this on steam? Only then can we play online with friends via Remote Play Together, that way you won't have to develop an Online Mode yourself and I can play with all my friends who are too scared of CORONA to visit!

Hi! I've definitely thought about it, as Remote Play Together would be super great. I'm in the process of reworking a number of things with the game at the moment (no idea when that will be done, since this is a side project), and will probably want to finish that before putting it on Steam.

Awesome, by the way, I never figured this out, do the swarm fighters gain anything from collecting shockwaves or is it solely for the purpose of keeping them away from the boss?

You can collect up to three per life, and it increases your firing speed. 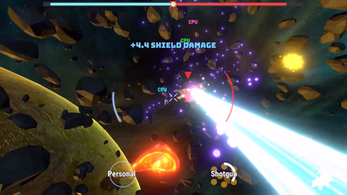 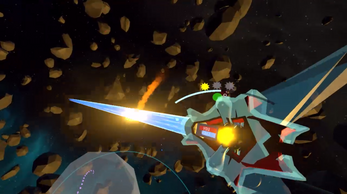 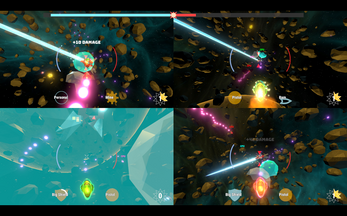 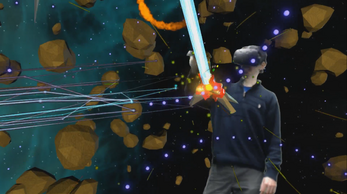