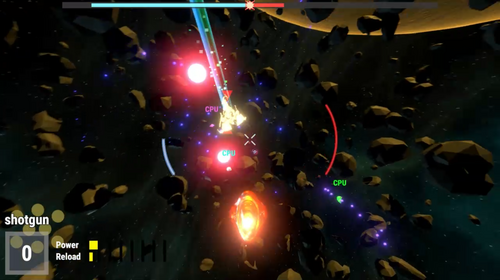 Many changes since the last version. Let's take a look!

More UI, So You Know Who You're Exploding

An issue I was seeing during play tests is that Dragonflies would sometimes spend all of their time collecting powerups, and none of it shooting at the Goliath, which kind of reduces the fun factor all around. That, and allowing Dragonflies to get infinitely more powerful seemed unfair to the Goliath. So the number of powerups has been capped at 3, with each powerup giving a significantly greater advantage than it did before.

Goliath Shockwave Powered Up, Slowed Down, and Separated

The Goliath's shockwave used to use the same recharge as the dust, but that didn't feel right. Players would tend to decide on using one or the other the whole time, based on which one they found most advantageous. Also, having unlimited shockwaves felt overpowered for those who knew how to use it, and underpowered for those who didn't.

Graphical changes here and there. Specifically, the powerups are no longer UV colored boxes, and the weapon boxes now show what weapon they contain. No more guessing!

Many new sounds have been implemented to aid in understanding what's going on in the game. Most importantly, the Goliath's damage sound is much more alarm-like. Also, there's a nice charge-up sound effect for the shockwave.

The previous soundtrack was a bit dull musically. The new soundtrack, while using some of the same instruments, makes more daring choices in time signature (7 and 5, anyone?) It's a bit short right now, but more will be added to it as time permits. Also, the music adds in drums when things start getting intense. Hooray for dynamic music!

And there it is. Those are the changes thus far. The current plan for the near future is to add some character to the players and the world, give it a bit more of a "story". Until the next update, farewell!