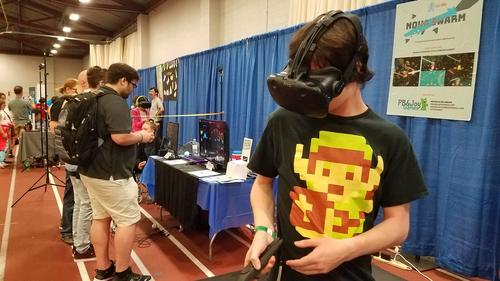 and it was a blast!

Thanks to everyone who came by and checked out Nova Swarm. It's always exciting to see people playing the game firsthand (and to learn what things need fixing and changing). I'll be posting a new version of the game within the next couple weeks that implements a couple of changes that were live at BostonFIG, as well as a couple things that I noticed were buggy or unbalanced.

Also, networking is on the way! It's still a few months out (again, balancing this with my actual job), but I'd say it's around 50% working. Once that's all polished up, you'll be able to play against people who have VR even if you don't, or play against non-VR players online if you have VR but no friends! (*sob*)

Splitscreen will still be available in online mode, so if you and three friends want to face off against a single VR player online, go for it!

Keep it spacey, y'all.